CALCULATION AND SIMULATION
Efficient approaches for
analysis and development

"The future of aeroacoustics in the automotive industry" 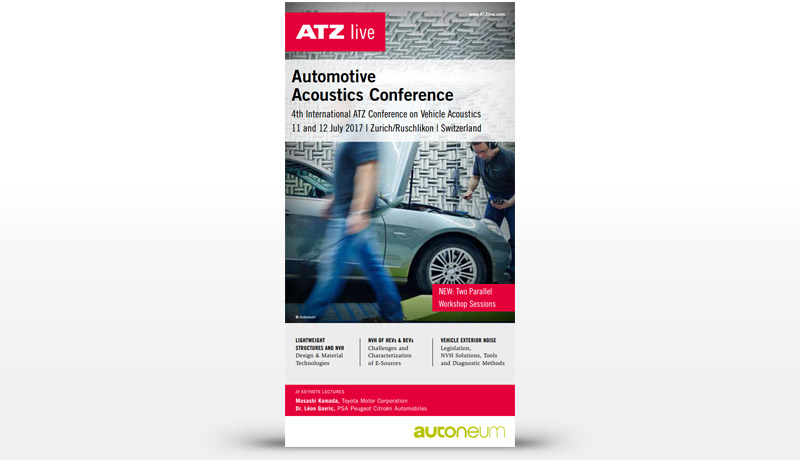 Report from the 5th International ATZ Conference on Vehicle Acoustics

The increased variety and complexity of today's powertrains further increase the effort required for acoustic development. Solutions to these problems are now being discussed at the Automotive Acoustics Conference.

Alternative drives, lightweight construction, and smaller engines all pose a great challenge to acoustic engineers. To cope with the rapid dynamics of technological progress, developers are faced with the task of effectively reducing not only the noise of the powertrain, but also that of many other components. In some parts of the vehicle, on the other hand, it is also necessary to substitute missing noises. It's evident that lightweight construction, alternative drives and smaller engines also increase the complexity of striving for a comfortable NVH level in both respects. Better measurement analyses and faster calculation methods are important tools for this and central topics in the experts' discussion.

The Automotive Acoustic Conference, possibly the most important platform for this discussion, is currently taking place for the 51st time in Zurich/Rüschlikon, welcoming 220 participants. Half of the trade visitors are from non-German-speaking countries, which underlines the international character of the conference, as Dr. Alexander Heintzel, Editor-in-Chief of the ATZ-MTZ Group, emphasised in his welcoming address. There were participants from Japan, China, Taiwan, South Korea, India and South Africa, whereas the Japanese were the most numerous and had the furthest journey.

Speaking first, Dr. Léon Gavric, Vice President and Senior Expert NVH of Groupe PSA, predicted that increasing regulatory pressure on internal combustion engines combined with technical improvements in electric drives and battery performance will lead to a greater demand for electric vehicles. No longer drowned out by the internal combustion engine, various noises of systems and devices, as well as wind noises, rolling noises and tyre noises, will become more noticeable. As a result, the NVH requirements are high compared to vehicles with internal combustion engines. A completely new but crucial NVH challenge for electric cars is to control the "whining" sound made by the electric drive. Disturbing noises such as squeaking, rattling and humming are also prohibited in the quiet BEV sector.

"The sound is decisive," said Dr. Ralf Bocksch, NVH Project Coordinator at Daimler and responsible for the Mercedes EQC electric brand, in a similar vein. The biggest challenge is to reduce road noises: Although the battery mass has a positive effect on the body structure, harder chassis and tyres lead to more acoustic effects from the road. The experiences made with the current Mercedes electric cars were the starting point for the NVH development of the new EQC. Upon this basis, damping and insulating parts were developed by adopting the structural concept of the GLC model. After a stringent, goal-oriented development process, the EQC developers succeeded in developing a quiet, comfortable and characteristic sound.

In his lecture on "Design principles of the electric powertrain mount of pure electric vehicles", Dr. Gregory Chen, Senior Chief Engineer at the Geely Automobile Research Institute, went straight into detail. According to him, the resonance characteristics of the mounting bracket are important factors for the noise of the electric drive in the vehicle at low speeds (approximately 40 km/h or less). The mounting bracket should be built compactly. The higher the modal frequency, the better the mounting system insulates the vibrations. Chen recommended a frequency above 1,000 Hz, and avoiding coupling between the natural frequency of the mounting system and the internal resonant frequency of the rubber mount.

Francesca Ronzio, Team Leader of Products and Systems Simulation and Manager at Autoneum, held a talk on "Methods and solutions for the integration of the HV battery into the NVH development of a BEV". She had a reassuring message for many developers, stating that existing and established CAE systems methods, such as statistical energy analysis (SEA) and finite element methods (FEM), can support the NVH design of BEV floor systems. The NVH package in question covered not only the carpet and damping pads, but also the battery seal and elements between battery and body.

Mark Allman-Ward, NVH Simulation Specialist at Bruel & Kjaer, who presented "A method for designing and delivering interior and exterior noise of an electric vehicle," also had a strong practical focus. "By removing the sounds of the combustion engine, we have killed a lot of emotions. Nobody has ever gotten out of an electric car and exclaimed, 'Wow, this sounds fantastic!'," said Ward critically, at the beginning of his talk. "If you ask 15 people in a room how an electric car should sound, you will get 35 different answers." Using real sound samples, Ward described the entire acoustic development process of the Fiat 500e, presenting an on-track evaluation of what makes up a "sporty sound" and even the vehicle's virtual sounds.