From driver assistance to autonomous driving

From Assistance to Automated Driving

Knowledge transfer from science to economy 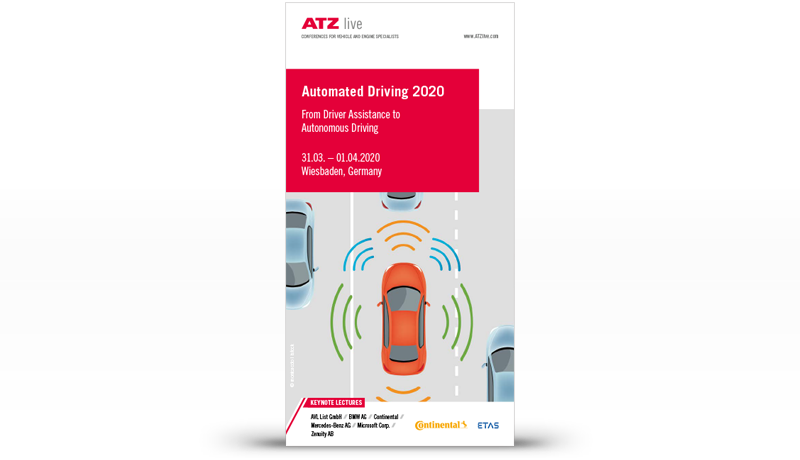 Around 120 developers took part in the Automated Driving Conference in October 2020, held in hybrid mode. Around two thirds opted for a personal presence.

The Automated Driving Symposium took place on October 13 and 14, 2020 and, as was the case for many other events this year due to the Corona pandemic, it was held in hybrid mode in the form of a partially virtual and partially live event, according to the availability of participants and speakers. This type of flexibility is beneficial for any event, whereby the conversation between sessions naturally remains important. For this reason, despite the prevailing company travel restrictions, almost two thirds of the participants came to Wiesbaden (Germany) in person. The event was held in two sections due to the large number of interesting papers and was organized in three main topics: Plan and Think, Sense, and Act. Lively individual discussions were possible thanks to the use of Q&As via app and chat forums for questions. The now ubiquitous live-stream with Q&A function was also used by the participants who were present in person as part of the hygiene concept to avoid the necessity of passing and disinfecting microphones. An exhibition with booths from Continental (virtual), Edag, Etas, IPG, dSpace and Munich Systems enriched the event, which was organized by ATZlive together with partners Continental and Etas. This enabled participants to obtain additional information during the breaks.

A Science Pitch, held during the event for the first time, allowed a group of researchers from the Technical Universities of Darmstadt and Dortmund to present their projects in areas such as environmental perception, sensor system architecture, and trajectory planning.

More Participants in Person Than Virtually via Web

The speakers presented numerous interesting aspects regarding the path toward highly automated driving in six keynotes and 23 talks. The topic is still in its infancy, both in terms of technological progress as well as jurisdiction. Not to mention that the first implementations will have to clear the hurdle of human acceptance. Sigrid de Vries, Secretary General of CLEPA (Comité de Liaison Européen des Fabricants d'Equipements et de Pièces Automobile, European Society of Automotive Suppliers), said that "the benefit of automated driving will only be truly apparent when it is widely used." CLEPA has long appealed for a global framework to be set up for the implementation of highly automated driving, which is just as necessary as fair access to vehicle data for different market participants.

Not a Trivial Undertaking

Robert Lokner, Senior Industry Solutions Manager Automotive EMEA at Microsoft, stated that the path is a relatively long one. Still, according to Microsoft's projections, 10 to 15 % of all vehicles could be driving autonomously by 2030. Among other things, an ecosystem for data from requirement engineering via homologation up to traceability is important for the development activities. There are many topics that must be driven forward within the scope of a powerful development environment. Naturally, Microsoft sees a focus of this in the area of data processing: This is supported by the fact that today petabytes of data can be processed in days rather than weeks and that this level of performance is continuously increasing. In any case, according to Lokner, a provider of autonomous mobility will need a clear strategy regarding data and AI.

Apart from the still huge challenges facing development and the validation of systems, their interaction and AI, there are many things whose true scope can only be guessed at: Topics that must be closely monitored are, for example, those new sources of failure that only occur during interaction within the whole system; those regarding self-checks of system health and the issue of maintaining and servicing the AI and sensors/actuators over the entire vehicle lifetime. Ralph Lauxmann, Senior Vice President AMS Strategy & Future Solutions at Continental Teves, discussed whether autonomous driving really is the ticket for future mobility.

Whatever this future looks like, the situation remains exciting and could materialize itself as being fairly heterogenous, depending on whether the situation is urban or rural. The next event takes place on June 8 and 9, 2021 in Wiesbaden.