Date and place are not yet fixed

Designing the acoustics of future vehicles

Regionally aligned to you

In order to meet your regional time requirements, the virtual conference consisted of two editions and took place on consecutive days. Individual lectures are tailored to regional interests.

All times are given in CET - Central European Time. 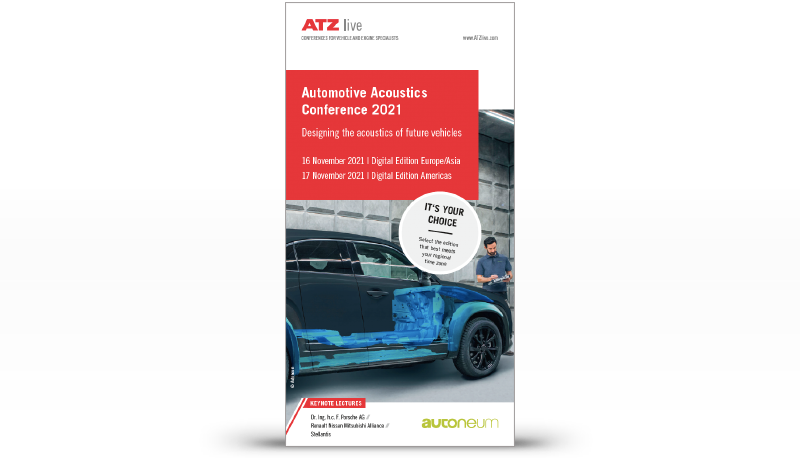 ATZlive’s Automotive Acoustics Conference 2021 was held online on two consecutive days. The first day was aimed at participants from Europe and Asia, the second at interested parties from America. Even in the purely virtual format, around 400 experts from 23 countries followed the industry meeting.

In 2021, the Automotive Acoustics Conference was both reduced and expanded. Reduced because, for reasons that we are all aware of, it could not be held live at the usual venue in Rüschlikon on Lake Zurich in Switzerland, but took place instead in virtual form on November 16 and 17, 2021. But expanded because it was broadcast on two consecutive days to accommodate regional time differences. Participants from Europe and Asia attended the first day, while the second day saw attendees from America taking part in the conference.

The main themes of the virtual conference were the technological innovations, market requirements and legal regulations that determine the latest technical developments in the automotive industry. Even in online form, the event demonstrated that it is the central meeting place for the industry: 270 specialists took part in the first day, which was intended for Asia and Europe, and about 100 attended the second day aimed at America. The participants came from a total of 23 countries.

After a welcome speech from the Editor in Chief of the ATZ/MTZ Group Dr. Alexander Heintzel and Davide Caprioli, Head of Acoustic at Autoneum Management, the program of presentations began without further ado on the morning of the first day. It became clear that electric vehicles were having an increasing influence on sound development.

“The sound of a car is its acoustic calling card and this applies equally to BEVs,” said Christian Lange, Team Leader BEV Taycan at Porsche, the first keynote speaker, in an interesting presentation on the development of the electric sports car. At the end of his speech, many of the participants took the opportunity to ask questions via the web portal. They wanted to learn in more detail about the acoustic references used by Porsche in the sound development of the Taycan and the company’s choice of tires.

Fredrik Hagman, Senior Sound Designer at Volvo, and Dr. Pontus Larrson, Interactive Sound Designer at Volvo, reported on the “Sonic Interaction in Intelligent Cars” project, which is investigating how audio interaction can be used to shape the user experience in the self-driving cars of the future. They played highly informative videos showing how vehicle occupants and pedestrians in the area near the car can be given an audible warning of the car’s braking maneuvers. Larsson played the sound signals that had been used during the test phase and described the level of acceptance among the test subjects.

In his presentation, Dr. Alexander Roy from IAV spoke about how abnormal vehicle noises can be identified using an AI-based approach when human drivers in automated vehicles are no longer responsible for monitoring potential faults.

Thomas Antoine, NVH Expert Leader at the Renault Nissan Mitsubishi Alliance, looked at how data science can be used in the design of NVH characteristics. He called for a cultural shift and explained that engineers and data scientists need to work together to develop a data-based approach to engineering. So-called dataneering methods represent the future of the development process and can make validation more efficient and cost-effective.

In his keynote speech, Dr. Léon Gavric, Senior Expert NVH at Stellantis, described the current noise limits in the EU and the problems of measuring vehicle pass-by noise according to UN ECE R51-03. In 2024, the threshold will be reduced to 68 dB and this represents a challenging target even for BEVs. In addition, there is the question of how the noise pollution that is expected to be caused by BEVs being charged in inner cities can be managed.

STRICTER NOISE LIMITS ON THE WAY

The majority of the pass-by noise from vehicles – between 60 and 90 % – is caused by the combination of the road surface and the tires. How can tire-induced pass-by noise and the effect of passive measures to counteract it be predicted? This question was investigated by Ji Woo Yoo, Senior Research Engineer at the Hyundai Motor Group, and Federico Di Marco, Engineer CAE Acoustic at Autoneum. They presented a refined version of the source-transfer-receiver diagram which models tires as a group of individual components.

Dr. Gianluca Di Nenno, NVH Expert at Stellantis, introduced a method for simulating pass-by noise. It uses numeric transfer functions and a library of sources that have been characterized on an experimental basis. The aim is to reduce pass-by noise and simplify the development process.

In the closing presentation, Hendrik Sell from Vibracoustic described the NVH optimization of electrified axles with the help of front-loading approaches. This involves using NVH test rigs to analyze and optimize entire axles without the surrounding vehicle. Sell published an article in ATZ on the subject of optimizing the vibration of entire axles in 2017.

“What will remain?” asked Heintzel after eight interesting and informative presentations. “We have learned that electric vehicles present just as much of a challenge for acoustics developers as the increased NVH caused by lightweight designs and smaller engines with turbochargers. In addition, the activities of regulators are increasingly providing guardrails that must be followed in development.”